The next fantastic guest we are pleased to announce as joining us for the weekend at Destination Star Trek is CHASE MASTERSON. She played the lovable Leeta in Deep Space 9. The event takes place at the NECBirmingham 25-27 October.

SHAZAD LATIF is joining us at Destination Star Trek. Shazad is currently playing Ash Tyler/Voq in Star Trek: Discovery! The event takes place at the NECBirmingham​ 25-27 October and Shazad will be there all 3 days.

In addition to his role on Star Trek: Discovery Shazad is known for his role as Clem Fandango on Toast of London, and his work on Penny Dreadful, The Second Best Exotic Marigold Hotel, and MI-5. Shazad will also be lending his vocal talent to the TV series The Dark Crystal: Age of Resistance.

DAPHNE ASHBROOK is joining us at Destination Star Trek on Sun 27th October. Daphne appeared in Deep Space Nine as Melora Pazlar in the episode 'Melora'.

SCOTT MACDONALD is coming to Destination Star Trek in Birmingham. Scott is a talented character actor and has been in 4 different series as 5 different characters! He was in Next Generation as Subcommander N'vek, in Voyager he played Rollins in 'Caretaker'.

Then in Deep Space Nine he was Tosk in 'Captive Pursuit' and then the Jem'Hadar Goran'Agar in 'Hippocratic Oath'. Star Trek Enterprise fans will know him best as the Xindi Commander Dolim as he appeared in 8 episodes.

HARRY JUDGE is making his first appearance at Destination Star Trek this October. Harry plays the Tellarite Admiral Gorch in Star Trek: Discovery, and was in the Short Trek 'The Escape Artist' as Tevrin Krit. Outside of Star Trek Harry's credits include Suits, Murdoch Mysteries, and Lost Girl.

You can book your event entry and photo shoot tickets now: http://bit.ly/DSTUK19 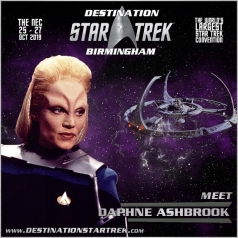 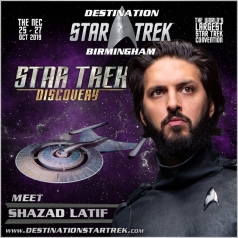 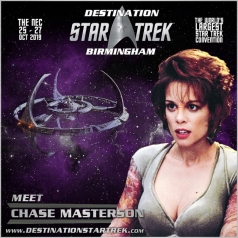 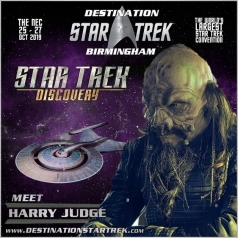