Destination Star Trek continues to expand its already hefty list of guests and while there's disappointing news - Jonathan Frakes is unable to attend - there's plenty of good news as news arrives that he is deep into work on season three Discovery and coming over to Birmingham are Star Trek Generations Captain Harriman Alan Ruck and Data himself, Brent Spiner.

Destination Star Trek welcomes the return of Brent Spiner to the event this October. Data is without doubt a fan favourite and the recent news that he is set to appear in Star Trek Picard, gives us even more reason to celebrate!

As Data, Spiner appeared in all 7 seasons of The Next Generation, and then appeared in all 4 TNG movies, getting a writers credit for Star Trek Nemesis. Spiner also appeared in a handful of Enterprise episodes primarily as Arik Soong. Outside of Star Trek, Brent has always remained busy showing up in Independence Day, Phenomenon, The Big Bang Theory, Warehouse 13, Ray Donovan and Outcast to name but a few!

Captain on the bridge! ALAN RUCK is coming to Destination Star Trek Birmingham this October, known in the Star Trek Universe as Captain Harriman appearing in Star Trek Generations. Ruck has made over 100 appearances in films and television, as well as on stage. He is probably best known for his role as the friend of Matthew Broderick and hopeless hypochondriac Cameron Frye, in John Hughes's Ferris Bueller's Day Off.

During the 1980s he appeared in films such as Class with Rob Lowe and Andrew McCarthy and Three for the Road with Charlie Sheen. The 1990s included Young Guns II: Blaze of Glory with Emilio Estevez and Lou Diamond Phillips, Speed with Keanu Reeves and Twister.

Ruck's television appearances include Tales from the Crypt opposite Lou Diamond Philips, Mad About You with Helen Hunt, and Spin City with Michael J. Fox.

The event is taking place 25-27 October at the NECBirmingham. Neutral Zone will be there and if you want to join in on this great weekend head here to get the information and your tickets: http://bit.ly/DSTUK19 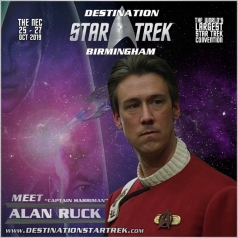 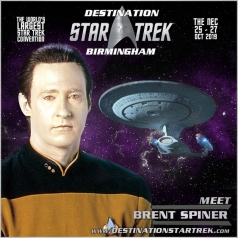