StarTrek.com interview the man behind so many great Star Trek moments, having appeared or directed every series apart from the original - Jonathan Frakes.

Here, in the latest instalment of Director's School, Frakes discusses his directing journey.

StarTrek.com: At what point did you realize you actually wanted to direct TNG?

Jonathan Frakes: I think it happened very early in the first season. I had done a lot of guest spots, and I always was attracted to, admired, hung around, and watched, and I was curious about the directing position. You can only take so many naps, which used to be one of the greatest parts of being an actor on a television series. If you were working on a scene in the morning and another scene later in the day, you come in early, you get made up and dressed up, and go to work and do a scene. Then, literally, the first AD or somebody would say, "You know what? I'll see you in a few hours." That meant, "Oh my God, I can nap, or I can read, or I can do my emails."

JF: Oh, yeah. Exactly. No emails, then. But the novelty of napping wore off. So, if I was between scenes, not working, I would take my fricking spacesuit off, hang out and watch. That was interesting to me. I've always been kind of a set brat. In the beginning of season two I voiced an interest to Rick [Berman] about directing, and I could feel his eyes roll. He and I were friends, in addition to being working companions, and he said, "Well you know what? You're gonna have to eventually train up. You don't know anything about editing." He comes from an editing background, from Big Blue Marble, when he was a producer and editor. So the major change in my life was to get permission from, and endorsement of Berman and Bob... I can’t remember his last name.

Remember, Jonathan will be appearing at Destination Star Trek in Birmingham on 25th - 27th October, so if you've not sorted your tickets yet, get busy and get buying. 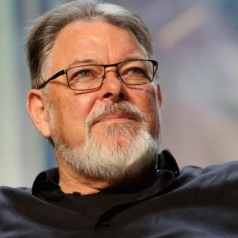