Destination Star Trek Birmingham grows ever closer and joining the stellar line-up of guests at the show is the chief engineer of the NX-01 USS Enterprise.

CONNOR TRINNEER is coming to Destination Star Trek Birmingham. Connor is best known as Commander Charles "Trip" Tucker III, the Chief Engineer and Second Officer aboard the Enterprise. The event takes place at the NECBirmingham 25-27 October, and you can book your entry and photo shoot tickets now: http://bit.ly/DSTUK19

In addition to his role on Enterprise, Connor has also made appearances on Stargate: Atlantis, NCIS, NCIS Los Angeles, The Mentalist, 24, Suits, Pretty Little Liars, and both Stargate Origins and the film Stagate Origins: Catherine as Professor Paul Langford.

There are plenty more guests yet to be announced for what is already an amazing line-up, so stay tuned. 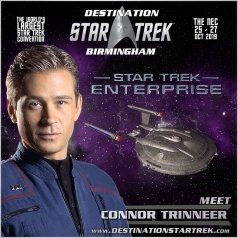