Anyone who watched the golden era of Star Trek during the 80's and into the 2000's will remember well the name Cosmo Genovese, Script Supervisor on Star Trek: The Next Generation from 1987-94 and Star Trek: Voyager from 1995-2000. Cosmo passed away on Tuesday 30th July aged 95. The Hollywood Reporter looked back at his life.

Star Trek: TNG and Voyager writers made subtle tributes to him on their series, putting his name on dedication plaques and directories, calling a flower shop "Genovese's Flowers" and a coffee shop "Cosimo" and dubbing an energetic carbon-based biological reactant "bio-genovesium."

Born in Chicago on Aug. 13, 1923, Genovese graduated from Northwestern with a degree in speech and served in the U.S. Armed Forces from 1943-46. After World War II, he directed television and radio shows at WGN before heading to California in the mid-1950s.

He worked on CBS' Perry Mason from 1957-64 and NBC's The A-Team from 1983-87 as well as on Broken Arrow, The New Mike Hammer, The Brady Bunch, Barnaby Jones, The Incredible Hulk and Tales From the Crypt.

Survivors include his wife, Kathy; son Ross and his wife, Cathy; and grandchildren Zenin and Jason.

Our condolences to Cosmo's family, friends and colleagues. 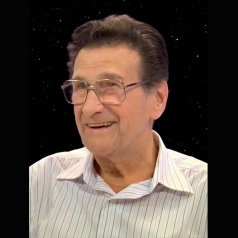