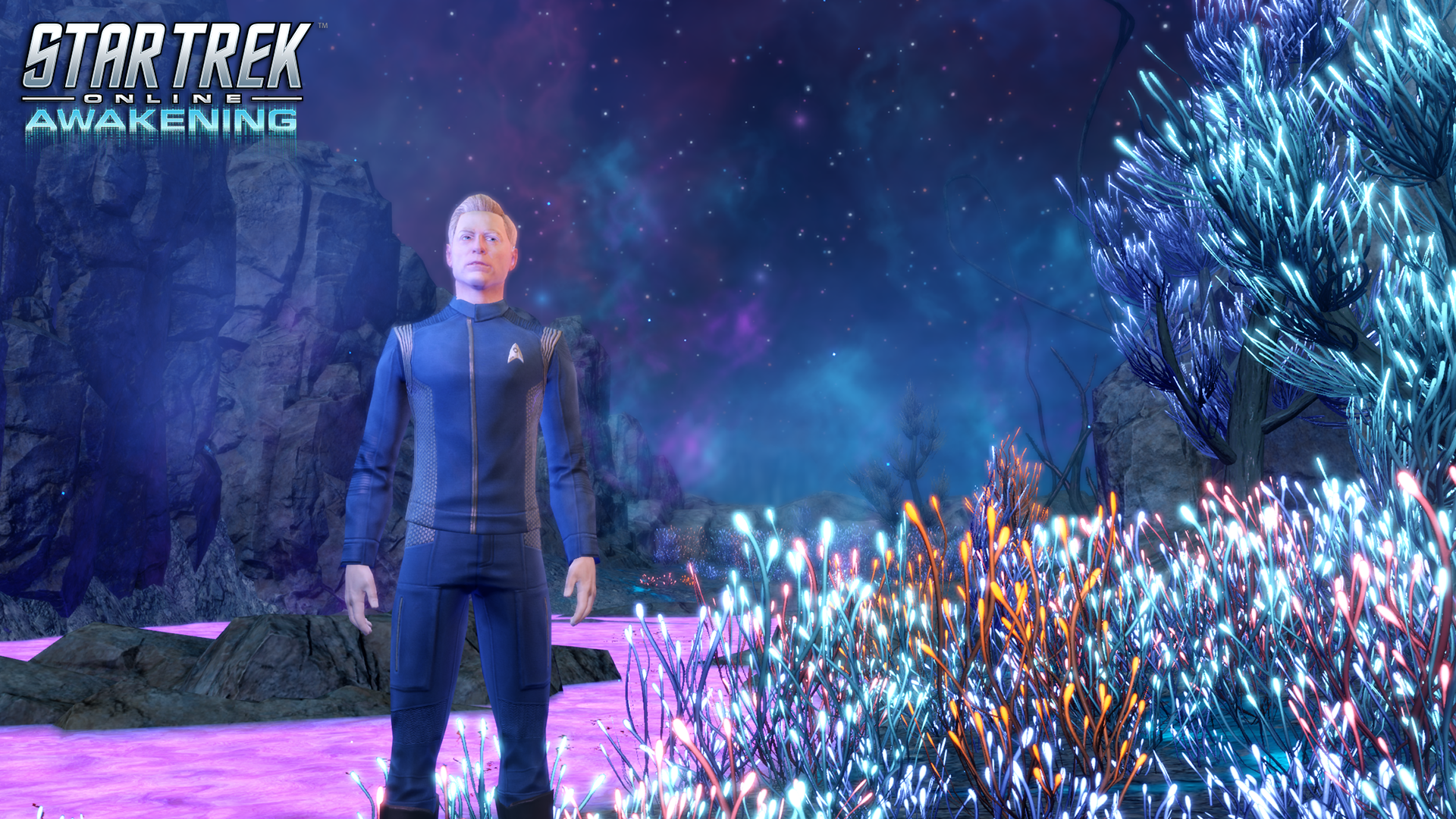 Today, Perfect World Entertainment Inc., a leading publisher of live service games, and Cryptic Studios announced Star Trek Online: Awakening beams down to PC on September 10 and releases on PlayStation®4 and Xbox One at a later date. Following the epic conclusion to the multi-part saga, Age of Discovery, the free-to-play Star Trek MMORPG will return to its original timeline in the 25th century. When Awakening releases this fall, players will warp to the year 2410, where they will embark on a mission to recover stolen Mycelial technology from J’Ula and the Klingons, with the help of Lt. Commander Paul Stamets (voiced by Anthony Rapp from Star Trek: Discovery) in holographic form. Captains can also access Awakening to participate in a series of exciting patrols to repair time rifts, a brand new Task Force Operation and a special Mycelial Event which rewards players with a new T6 Elachi ship for completing missions.

“Last fall marked a historical moment for Star Trek Online, as we explored the vast universe of Star Trek: Discovery and developed content in conjunction with a live Star Trek series for the very first time,” says the game’s Executive Producer Andre Emerson. “The show’s cadence also allowed us to build an expansion over time, yielding exciting new missions, dozens of unexplored starships and countless hours of story content starring original Discovery cast members. The time has now come for captains to return home to the 25th century and we cannot wait for them to experience the next chapter.”

During Age of Discovery, players witnessed J’Ula and her Klingon forces stealing Mycelial technology, which pulled them forward to the year 2410. Captains must now follow this ruthless Klingon matriarch back to the 25th century to ensure she doesn’t corrupt the entire Mycelial Network in pursuit of her own dangerous agenda. Unfortunately, the insurmountable threat J’Ula poses to the universe also draws out the Elachi, who fear her actions will lead to the destruction of their home planet - and they will stop at nothing to protect it. In order to complete their mission, Captains must rely on the help of an astromycologist expert, a sentient hologram of the legendary Lieutenant Commander Paul Stamets from the U.S.S. Discovery (voiced by Anthony Rapp), to help them track down J’Ula and repair the tears she’s caused in the fabric of space.

These events transpire over the course of a new episode debuting with Awakening this fall. The update also introduces a series of new patrols, which will send Captains on a mission with Stamets and Star Trek Online luminaries like Lukari Captain Kuumaarke to reverse the damage the Klingons have caused to the Mycelial Network. With them come a revamped Patrols System, which has been updated to allow better access to the game’s patrols and yield new rewards. Finally, players will also be able to participate in a new 5-player Task Force Operation and a special Mycelial Event, which allows them to earn a new T6 Elachi ship by completing the new episode, patrols and TFO. Additional details will be released when Awakening launches on PC September 10.

While waiting for Star Trek Online: Awakening to release this fall, players can still catch up on all three chapters of Age of Discovery for free on PC, Xbox One and PlayStation®4. Players can create a Federation Captain from the Discovery timeline and explore six featured episodes starring original characters from the show, including Ensign Sylvia Tilly and Captain Killy from the Mirror Universe (voiced by Mary Wiseman), as well as Captain Gabriel Lorca (voiced by Jason Isaacs) and Commander Ellen Landry (voiced by Rekha Sharma). Age of Discovery also introduces brand new game content, including the popular Task Force Operations and Personal Endeavors system, and streamlines the game for new users by revamping the mission journal and removing level restrictions for Tier 6 starships.

Star Trek Online is headed to Star Trek Las Vegas this weekend! On Friday at 2:00 pm, the developers from Cryptic Studios will host a panel for Age of Discovery, featuring a guest appearance by Rekha Sharma and prizes provided by Tribble Toys. On Sunday at 2:15 pm, the team will reveal a first look at Star Trek Online: Awakening with Elijah from Priority One Podcast and special guest, Anthony Rapp from Star Trek: Discovery. The first 200 attendees will receive a Star Trek Online enamel pin and a chance to win prizes from Eaglemoss and Tribble Toys. Players are also invited to meet the devs at events that take place at the convention throughout the weekend. Additional details are available on Star Trek Online’s blog.

You can watch the full trailer here -