Fantastic news, hot on the heels of the shocking end to season two of Discovery and in a year where Destination Star Trek returns to the halls of the Birmingham NEC, the announcement comes that DST is heading back to Germany in May  2020.

LONDON, April 29th 2019 – Destination Star Trek Germany, Europe’s official Star Trek convention, will return in May 2020 to give fans the chance to join the celebrations of everything Star Trek, including the very special 25th Anniversary of Star Trek Voyager.

Under license by CBS Consumer Products, the seventh Destination Star Trek, the third to be hosted in Germany, is all set for 8-10 May 2020, at the Messe Westfallenhallen in Dortmund.
Destination Star Trek is a weekend for fans to embrace their love of all things Star Trek. There will be something for fans of all incarnations of the show to enjoy, from the classic series to the very latest show to air, Star Trek: Discovery, and not forgetting some important anniversaries for the hugely successful movies!

The first guest to be announced is KATE MULGREW (Captain Katherine Janeway) who will headline the event. As captain of the U.S.S. Voyager, Kate will lead the celebrations in this very special Star Trek: Voyager anniversary year.
In addition to meeting popular Star Trek actors, collecting autographs, photos and watching live stage panels, fans also will be able to sit in the Captain’s chair, browse some exciting Star Trek merchandise and see original props and costumes in the Destination Star Trek Museum, plus much much more still to be announced.
“For over five decades, Star Trek has continued to take us to the Final Frontier. With the new series’ now airing and in production it’s an exciting time to be a Star Trek fan,” said event organiser, Mark Woollard. “Destination Star Trek Germany will continue to celebrate what has gone before and what is to come in the future, so we can boldly go where no one has gone before. We are very excited to be coming back to Germany, the true heart of Star Trek fandom on mainland Europe”.

Stay tuned for all the latest announcements and news as the guest list and activities for the event continue to develop. 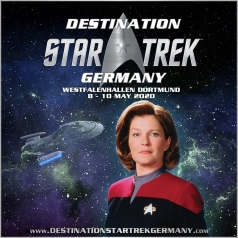 Previous Story Warp Trails #2-14: Such Sweet Sorrow Part 2
Next Story Marina Sirtis to star in Max Winslow and the House of Secrets