The official Star Trek site has released a new image for the latest Star Trek: Discovery episode.  It comes from the first part of the season finale which will be made up of two episodes.  The episode is called "Such Sweet Sorrow."

If you head over to the official site you can also watch a preview of the show which will stream on CBS All Access in the US and on Netflix, Friday. 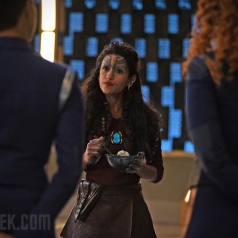