Wilson Cruz on Discovery and the Stamets and Culber relationship 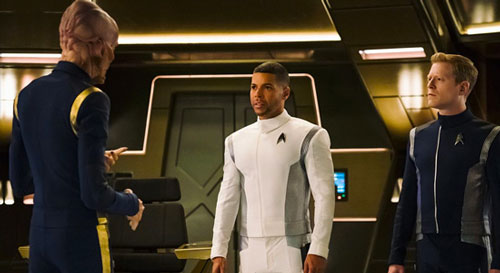 Wilson Cruz, an actor who has featured in all manner of successful series including My So-Called Life, Nixon, Joyride, Party of Five, Party Monster, He’s Just Not That Into You, Pushing Daisies, Grey’s Anatomy, Shameless and 13 Reasons Why talks to the official Star Trek website about his career and the character of Doctor Hugh Culber on Star Trek: Discovery.

“As a little Latin boy in Brooklyn and in the Inland Empire of California, I spent a lot of time in front of the TV because one parent worked nights, and my mom worked really late days, and I was the oldest of three kids. I spent a lot of time in front of the television, and so a lot of my views of the world came from things I experienced and was exposed to on television, and a lot of that I owe to Star Trek, especially in reference to this multicultural Utopian ideal. That really forms the way that I thought we, as people, should be moving towards. And this idea that we are all interconnected, and that we should see ourselves in people that are even vastly different than ourselves in order to find commonalities in that and to work from there in order to succeed, that all came from Star Trek. So, now to be a part of that mythology, of that history, for me, is overwhelming.”

For more on his career, his love of Trek and the developing relationship between the doctor and the scientist, head on over to the official site (http://www.startrek.com/article/interview-discoverys-wilson-cruz)