Take a look at this exclusive image from the ninth episode of Star Trek Discovery's second season, Project Daedalus, directed by Jonathan Frakes.

Also, click here to watch the global preview of the episode over at StarTrek.com

"Project Daedalus" is the ninth episode of Star Trek: Discovery's second season, and we have your global preview right here, first. When the Discovery crew infiltrates Section 31’s headquarters, suspicions arise that the crew may have a traitor in their midst. Burnham tries to help Spock but her efforts don’t go as planned." 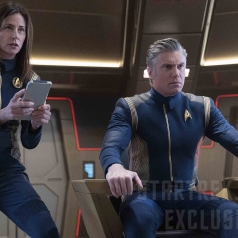 Previous Story Watch Ethan Peck on the latest edition of The Ready Room
Next Story Warp Trails #2-8: If Memory Serves