The Picard series draws ever nearer, with shooting beginnning next month and following on from our report regardiong new characters coming in to the series, CBS have released details regarding some of the actors behind these characters.

Santiago Cabrera recently starred for two seasons on the CBS suspense thriller Salvation, and appeared in Big Little Lies opposite Reese Witherspoon and Nicole Kidman. Cabrera, also known for his role as Aramis in the BBC series The Musketeers, counts among his other television credits The Mindy Project, Merlin, Heroes, and the telemovie Hemingway and Gellhorn. His film credits include Che, For Greater Glory, and Transformers: The Last Knight.

Michelle Hurd brought life to Shepherd on Blindspot, and was recently seen on Lethal Weapon. Hurd's other television credits include Ash Vs. Evil Dead, Daredevil, Jessica Jones, The Glades, and CBS’ Hawaii Five-0. Among her film credits are You Can Choose Your Family and We Don’t Belong Here. She will next be seen in Justin Simien's latest film Bad Hair, alongside Star Trek: Deep Space Nine guest star Vanessa Williams, and Laverne Cox. Hurd is an alumnus of NYC’s premiere artist community at Westbeth.

It's worth noting the presense here of Heather Kadin, who appears to have stepped away from Discovery's third season to concentrate on the debut season of Picard. Good luck to all involved, the fandom is waiting with baited breath. 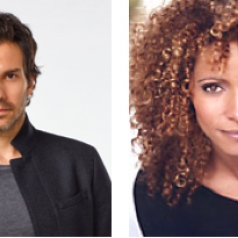