“There is another universe, out there. One that is dark and twisted, like a cracked reflection on an ancient mirror. There, the brutal Terran Empire reigns supreme, and all life must either submit or rebel. There have been incursions into our universe from the Terran Empire before, most notably at the behest of the insane Admiral Leeta, but nothing like this. On March 5th, the infamous Captain Killy finally makes her first appearance anywhere in Star Trek media, as Mary Wiseman returns to Star Trek Online. You’ll face off against this twisted version of Tilly, and much more, as part of our Ninth Anniversary update, Mirror of Discovery

“Captains on Xbox One and Playstation 4 will travel to the forest planet of Pahvo, to investigate strange readings from an Ion Storm. From there, a two episode arc will place you in a deadly race against time – and to determine whether this ruthless Captain will be an ally or an enemy. Mirror of Discovery also brings back the Omega Molecule Stabilization Event, in celebration of Star Trek Online‘s 9th anniversary. Players can collect Omega particles scattered across the galaxy to earn the new T6 Vulcan Scout Ship, which was featured in Star Trek: Discovery. A full list of features will be provided…on March 5.”

“In Pahvo Dissension, a new Featured Task Force Operation, five Alliance captains will deal with the aftermath of the recent events at Pahvo. Wreckage of the I.S.S. Charon has crash landed on the planet, torn through time and space due to ion storms, mycelial interference, and Captain Tilly’s nefarious actions. The Terrans want to make Prime Pahvo into the bioterror that is Mirror Pahvo.” 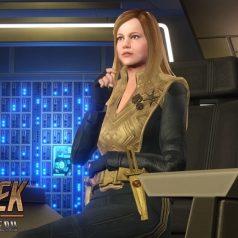 Previous Story Take an early look at The Sound of Thunder
Next Story Star Trek The Next Generation: The U.S.S. Enterprise NCC-1701-D Illustrated Handbook