I've had the great fortune to interview Greg Hildebrandt on three separate occasions, most recently about returning to his and his late brother Tim's classic UK Star Wars Quad. Celebrating his 80th birthday yesterday,  and with a stellar career showing no signs of abating, Greg has produced his very first Star Trek artwork, for IDW Comics.

StarTrek.com caught up with Greg to discuss his new piece and ask why his distinctive style has taken so long to arrive in the Star Trek universe.

This is your first-ever cover for a Star Trek comic book. What took so long?

What took so long is simple: No one ever asked me before. I’d never really thought about it because I am always busy.

Had you ever come close, or did you and Trek simply somehow never crossed paths until now? And how did this happen? Who at IDW approached you?

No, I never came close before, even though I have been a Star Trek fan right from the beginning. For whatever reason, I never really tried to pursue getting a Trek commission. I didn’t know anyone who was in charge of Trek and so it didn’t happen until now. My agent, Jean Scrocco, is working with IDW on a series of art books on my work. She has been working with Scott Dunbier, and Scott sent her an email to see if I would do a Trek cover. Jean said she would ask me, but she already knew I would. She walked into my studio, asked me, saw the grin on my face and told Scott yes. 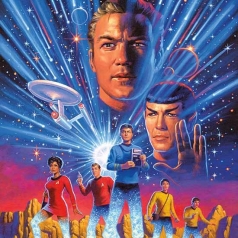