Did you grow up with “Star Trek”? I’m talking about “The Original Series,” which ran from 1966 to ’69, starring William Shatner and Leonard Nimoy — both Jews, as you know.

My dad watched “The Original Series,” I remember that as a small child, but it was on too late for me to watch. It seemed very grownup and incomprehensible. I must’ve been 4 or 5. But I remember his attachment to it. When I was 10, I had a babysitter. “The Original Series” was on syndication everywhere, and she was a Trekkie, self-described. She turned me onto it. We had it on every time she was over. She would go to conventions and come back with cool stuff. She was my introduction to the show and to fandom all at once.

A trailer for “Calypso” teased a setting about 1,000 years after “Discovery.” What is “Calypso” about?

It is about a castaway who is rescued by the Discovery, in the far future, and is rescued by the AI of the starship. It’s about the relationship that forms between the mysterious castaway and the AI. And there is a mystery of what it’s been doing for the last millennium. By the end, some mysteries are explained and others remain mysteries.

I know you can’t talk about the Picard series right now, but I have to try: Can you say anything generally about the setting or time period? Or themes you’re interested in exploring in that series?

I cannot answer either of those questions. I will be abducted by Section 31.

How is it different writing with a group of people in a television series writers’ room versus writing alone?

It’s very different. It’s really pleasurable. That’s one of the things I enjoy most about it. It could be a horrible thing if the people were not nice and kind, but this room is full of bright, funny, charming people with great ideas. Solving plot problems by yourself can be agonizing. Sometimes I get into a hole, and I just bang my head against the wall, and it takes weeks or months, and maybe I never solve it. But when there’s this room of smart people, and they all bring their experiences in life and as readers and consumers of media. You can see this unsolvable problem, and then after an hour of conversation it works itself out. 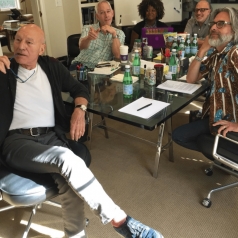