I was lucky enough to be asked by the team at Showmasters and Massive Events to not only host a couple of panels, but to also stage manage the fan-focused Excelsior Stage. As a consequence, most of my Destination Star Trek adventure took place on that stage, but don't be fooled into thinking it was anything but interesting. Sure, the larger ticketed Enterprise Stage had some major panels, all well worth the price of admission, but a quick look at Day Two on Excelsior gives you a good picture of what we had on offer.

Kicking off we had the Warp Speed Quiz, organised and hosted by Dan Mason from the Trekkies Guide ot the Galaxy and James Dillon from Riker's Beard. What a great, fun way to start the day as 60 teams competed in a 45 minute quick fire quiz that had everyone buzzing (literally). Hands up - I entered the quiz as John Luke Pick Hard with my pal Tim Davies from Star Trek Online and we came second, but how could we take prizes away from such deserving contestants!

Next up was The Pages of Star Trek with host John Van Citters of StarTrek.com. He was joined by Una McCormick and James Swallow as the two UK authors discussed their time writing in the Star Trek galaxy. The European Space Agency were rightly delighted at the successful launch of Bepicolumbo that morinng and that showed as they took us through the details of the mission and looked at the further explorations of our solar system

Admiral and Captains package purchasers were treated to a trio of DS9 guests in the form of Alexander Siddig, Cirroc Lofton and Jeffrey Combs as they bantered and joked thorugh 45 minutes of memories, followed by a further 45 minute chat between myself and Cirroc as he looked back at his time on the show and the formative years spent on the set playing pranks (lots of borrowing golf carts and riding around the Paramount lot) and developing a close bond with onscreen father Avery Brooks.

Getting the Look was the name of the next panel which saw a returning John Van Citters sit down and discuss the finer points of starship design with Star Trek legend John Eaves. A fascinating talk, it highlighted the immense skill and craft that went into designing these beloved vessels.

Tim Davies was next, talking all things Star Trek Online and bringing out his guest Mary Wiseman, who has joined the online game as Ensign Tilly. That was followed on the Excelsior Stage by Dr. Tim Summers and a packed hall as he took us through the Music Of Star Trek, and finishing the afternoon was Dr. Gerachty and his illuminating panel on Fans and Collecting.

Keep checking back to the site and our social media channels as we continue to cover the biggest Star Trek show of the autumn. 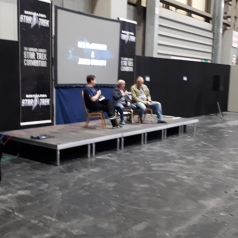 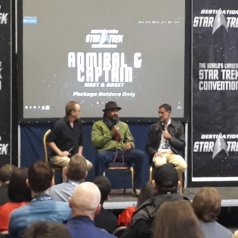 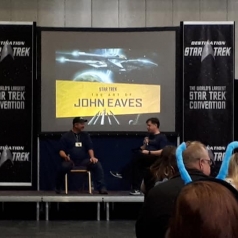 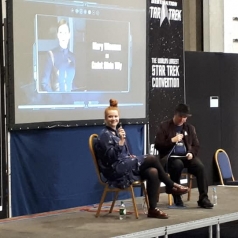