Check out Titan Magazines Star Trek: Discovery: The Official Companion, which gives us a deep dive into the making, the characters and the magic behind the opening season of the show.

Star Trek: Discovery: The Official Companion will arrive in stores and online outlets on September 4. Published by Titan, The Official Companion delves into the making of Discovery’s first season. More than just the tale of the U.S.S. Discovery and her crew, the story of Discovery season one is also the tale of a massive creative collaboration – of how hundreds of actors, producers, writers, designers, costumers, makeup artists and visual effects creators came together to bring Star Trek back to the small screen. Episode by episode, the Companion tells that story, from both behind and in front of the camera, with insights and commentary from, among others, Mary Wiseman, Mary Chieffo, Tamara Deverell, Gersha Phillips, and Glenn Hetrick. 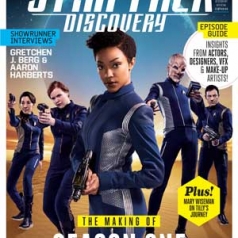