As if Christmas isn't cool enough, loaded with Short Treks and the promise of season two Discovery and Patrick Stewarts return to the galaxy, we'll also be getting a Christmas album from the one, the only William Shatner. It arrives 26th October via Cleopatra Records and i's available to pre-order on Amazon by clicking here. Here's what you can look forward to.

A very special gift of the holidays - the first ever Christmas album from the godfather of dramatic musical interpretations and a legend of stage and screen, Mr. William Shatner! Features an incredible cast of supporting players such as Henry Rollins, Billy Gibbons, Judy Collins, Brad Paisley, Rick Wakeman, Iggy Pop, Todd Rundgren, Joe Louis Walker and more! This is a holiday treat the whole family can enjoy with gorgeous and fun arrangements of these holiday classics as well as an original tune "One For You, One For Me!" Available on both CD & limited edition red vinyl!

Don't judge us for saying that we're as keen as a truck full of tribbles to hear this - perhaps he'll sing a tune or two at Destination Star Trek 19th - 21st October at the NEC. 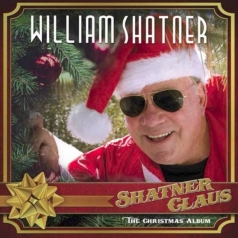