New aliens coming our way in season two of Discovery

In the spirit of roads not taken, here's a look at a possible Saru designed for Star Trek: Discovery and not used. creature designer Neville Page and makeup designer Glenn Hetrick took to Facebook Live for a half hour tour behind the scenes, answering fan questions and giving us a look at what might have been. We saw the alternate Saru, and Hetrick discussed the return of the Klingons in season two.

When you look at beloved Klingons from TOS and Next Gen and the movie series, and the way the look evolves, the one thing that always bothered me is their wardrobe is almost always the same. The look is almost always unified. So, that is one of our biggest goals. If you think about the cultural patina that is the human species that is on this planet for a relatively short amount of time and how different our cultures look … the Klingon Empire, having of course not all grown up on Qo’noS but all these different planets, the Houses would look incredibly different. And we are really just starting, wait until you see season two. We are really just starting down that road and there is so much more we have developed that hasn’t been unpacked yet.

Hetrick then took a look at the even more alien characters coming to season two.

If we know it is in a ton of pages in a specific script, we know the performer is going to be wearing it for 15 hours for several days in a row. You have got to figure out ways to reduce its weight, make it as breathable as possible, make the vision as clear as possible, or if that is not possible – coming up in season 2 you will see something exactly like this – because you don’t want everything to look like a guy in a mask. So, if you are really overly cautious, it looks like a dude in a suit, and the eyes are exactly where they belong. So, when you change the eye position, you have to figure out a way of dealing with that. How do you allow them to still have vision, but not not put the eyes exactly where they are. Maybe, you make them removable…A lot of that goes into how you can make something that is truly alien.

The one that we both agree on, and if you look closely at promotional things you may be able to guess at this, we have already done it for season two. That question was sort of thrown out there at the beginning of the season… So, when the executives asked us if there are any species we would like to do from canon that hadn’t been filmed yet… We came back with this whole list. One of those things made it, and it has a pretty substantial role in season two. And it is awesome.

It has to look like a Borg. That was established. There was a particular aesthetic choice that was made … but for me the coolest challenge is to make sense of those choices. Like reverse engineering why those tubes are going in and out of things. It would be to try to make sense of that and then contemporize that aesthetic with audiences demand today and expect.

And Hetricks went into the specifics.

Go to [H.R.] Geiger and steampunk and find a way to combine it and maybe play with the colors and bring the palette out of the greys and the blacks and find some rusty and cool metallic tones and start defining the flesh in a different way. If some of those limbs are necrotic, are some of those tubes pumping life back into them? Do they change color depending on how long they have been in the collective? Does the body stay alive?

There are so many things to play with. It is sort of playing with what is there and playing with it. Michael Westmore Jr. did all the lasers and lights inside and LED components. That is something today with 3D printing we can push infinitely further. We can do a lot more lighting and moving parts.

Looks like we have an amazing second season of Discovery coming our way in early 2019. 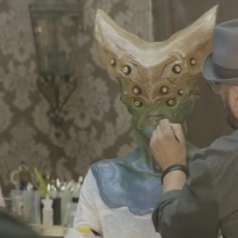 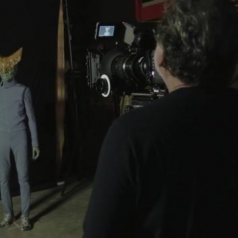 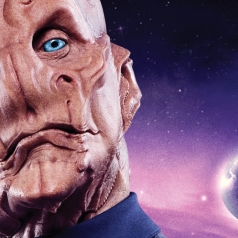 Previous Story Star Trek: Planet of the Titans model up for auction
Next Story Patrick Stewart teases a return to Star Trek