Star Trek: Planet of the Titans model up for auction

It's one of many 'lost' Trek productions, from the late 70's and designed by Ken Adams and Ralph McQuarrie. Available for $40,000 this is an absolute gem, a link in the chain that came from the original series, the second unproduced series of the mid 70's (better known these days as Phase Two), the Motion Picture and by design extention Star Trek: Discovery.

Ralph McQuarrie and Ken Adam designed model for Star Trek's USS Enterprise, with McQuarrie's influence evident in the model's triangular design, while still retaining the original Starship Enterprise aesthetic by Matt Jefferie. Made in 1976 for the unproduced ''Star Trek: Planet of the Titans'', this model was subsequently screen-used in ''Star Trek: The Next Generation'' as part of the armada destroyed in the epic ''Battle of Wolf 359'' between the United Federation of Planets and the Borg Collective.

At the time of this model, McQuarrie was completing work on ''Star Wars'', whose influence has been noted here, specifically, its similarity to the Star Destroyers of ''Star Wars''. The design of this model is also the inspiration for the redesigned USS Discovery starship in 2017's ''Star Trek: Discovery''. Ship measures 15'' x 8'' wide, made of wood and plastic and with tape and ink accents. Professional repair where nacelle pylons meet the secondary hull, overall in very good condition, stunning for display. Accompanied by the book ''The Art of Star Trek'', where the model is photographed and featured on page 56.

So if you have a spare $40k jangling around in your pockets, get bidding. 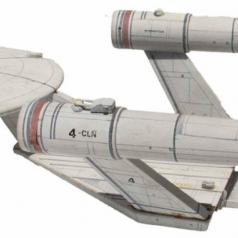 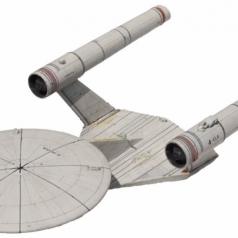 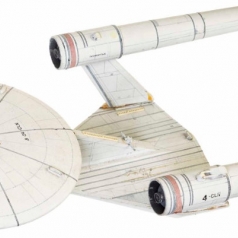 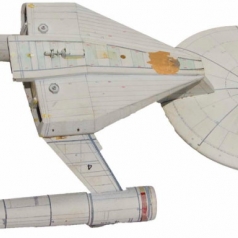 Previous Story Could a Star Trek amusement park be coming to Universal?
Next Story New aliens coming our way in season two of Discovery